In 2018, the Asteroid Institute announced its partnership with Google Cloud Services Platform and Analytical Graphics Inc (AGI) on the Asteroid Discovery Analysis and Mapping (ADAM) platform. This partnership was a critical launching point for the ADAM project: AGI provides its proven STK software to serve as a core component in ADAM, and Google’s cloud platform enables the large-scale parallel computations necessary for orbit prediction scalability. Our ability to launch and scale ADAM created space to build our core engineering and research team at Asteroid Institute.

Dr. Sarah Greenstreet has been a key member of the Asteroid Institute science and research team since 2018. She represents Asteroid Institute’s scientific and technical advancements within the asteroid and planetary defense community, including having authored articles in journals such as Icarus and Physics Today. She presented original research at the biannual Planetary Defense Conference, and she has an asteroid named after her!

This year, Dr. Greenstreet presented a description of Asteroid Institute’s ADAM platform and the results of two scientific studies that were conducted using ADAM. Her presentation was for the American Astronomical Society’s Division for Planetary Sciences 2021 meeting (October 3-8). The DPS has the largest membership of planetary scientists in the world.

The first of the studies Dr. Greenstreet presented looked at the required “kick” an asteroid on an Earth-impacting trajectory would need to avoid impact and how that required “kick” changes depending on how much time (up to 50 years) before the pending impact the “kick” could be applied to the asteroid. 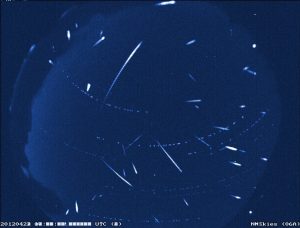 That work was published in a peer-reviewed paper last year in the journal Icarus. The study found that, unsurprisingly, the more time we have to deflect an incoming asteroid, the smaller the deflection needs to be.

However, the study also identified a small fraction of impacting asteroids that require at least ten times smaller or larger deflection “kicks” than the average “kick”, mostly due to the geometry of their impacting orbits with the Earth’s orbit (i.e., some asteroids are extra easy to deflect and others are exceptionally difficult, both because of the way their orbits intersect the orbit of the Earth).

The second study included in the meeting presentation described preliminary results from a study of how the probability (or our knowledge) of an asteroid impact changes over the 50 years leading up to the impact.

Both studies use the cloud-based ADAM platform to perform large-scale calculations made possible with ADAM’s architecture. The studies are key for asteroid discovery and deflection.

Asteroid Institute commends Dr. Greenstreet on her accomplishments and looks forward to her future contributions.

“The best thing the public can do right now is to advocate for increased funding to accelerate asteroid discovery rates.”