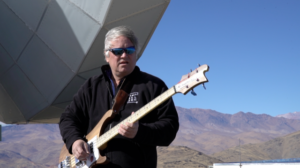 We recently sat down with Asteroid Circle member Rick Armstrong, to learn a bit more about his connection to space, why he supports B612 and the Asteroid Institute and what inspires him.

Tell our readers a little bit about yourself. What do you do for work? For fun?

My day job is a software developer/consultant, specifically database development.  For fun I do music, both playing in a band called “Edison’s Children” and on my own doing space ambient/electronic music.  I put out my first album earlier this year, it’s available at the usual download and streaming sites like iTunes, Amazon, and Spotify, as well as at rickarmstrong.bandcamp.com.  I try to play as much golf as I can.  I also serve on the Board of Directors of the Astronaut Scholarship Foundation.

When you were a youngster, what did you think about the universe or our solar system or space in general?

I read lots of space related books as well as sci-fi, so I was really interested in all of it.  I’m sure my dad’s job had some kind of influence on that although I can’t say definitely that it did.

How did you first learn about B612? What about B612 and the Asteroid Institute intrigued you the most?

I think I saw Rusty Schweickart talk about the Sentinel project numerous years ago.  The prospect of being able to find more and more asteroids, and therefore having a chance to do something about them, was a really worthwhile undertaking and worth supporting  in my view.

What excites you most about the “high frontier” of space and space exploration?

Probably the inspiration that it provides to people, especially kids, all over the world.  I’ve seen that result in people I’ve met  in relation to the Apollo program many times over.  That is of a value that is impossible to calculate I think.

What work of art, music, science, mathematics, or literature has surprised, unsettled, or challenged you, and in what way?

A couple of years ago I saw a planetarium film called Dark Universe that described the observable universe as 13.8 billion light years across.  I already knew that, but then it said that distance was the same no matter where you were on the universe map – I think that qualifies as a major head-scratcher!

I think my first real exposure to the issue of  planetary threats was a book called Lucifer’s Hammer by Larry Niven and Jerry Pournelle.  I remember thinking then what a helpless feeling it would be to be unprepared to at least have a chance at defending against this kind of devastating event.  There are some things that you have to be proactive about, and planetary defense is one of them.

What is your favorite quote about space or astronomy or making the world a better place? Who said it?

There are a few quotes that I keep coming back to: “Space is big.” by Douglas Adams , “A man’s reach should exceed his grasp.  Or what’s a heaven for?” by Robert Browning, and “We came all this way to explore the Moon, and the most important thing is that we discovered the Earth.” by Bill Anders

If you had to name your real life superpower, what would it be?!

I think it would have to be flying.