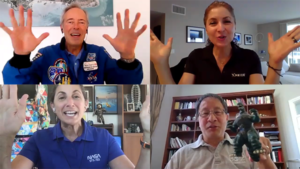 On June 30th, individuals, astronomy groups, schools, museums and organizations from around the world came together, looked into the skies, and then shifted their gaze onto computer screens  to celebrate a virtual Asteroid Day.  In years past, Asteroid Day brought asteroid experts, notables and space agencies leaders together in Luxembourg for a live broadcast. Due to the COVID pandemic this year, Asteroid Day embarked  on a new journey and hosted their Asteroid Day LIVE program from  living rooms and offices around the world. In addition Asteroid Day TV, a broadcast of asteroid education programming which ran for 34 days leading up to Asteroid Day. B612 is a founding partner and continuing sponsor of Asteroid Day and we were proud to support the evolution of this year’s programming.

As the first and earliest founding partner of Asteroid Day, we are pleased to see Asteroid Day’s global reach year over year and particularly this year. The combined press and social media reach measured through Talkwalker was over nine billion. And the  Asteroid Day LIVE Digital program was watched by more than two million people on Twitch.tv between 29 June and 1 July in addition to viewers tuning in via SES satellites, which they can not measure. A small sampling  of articles include BILD (German), NDTV (Indian), YAHOO!/Geekwire (English), El Debate (Spanish), La Repubblica (Italian), Futura Sciences (French), and Lëtzebuerger Journal (Luxembourg – Asteroid Day’s  home country). This sampling represents just a few of the global articles in dozens of languages from around the world leading up to and just after Asteroid Day 2020.

You can read more about the 2020 Asteroid Day events and activities here.