The worldwide premiere of Apollo 9 & Beyond featuring Rusty Schweickart debuted on Asteroid Day TV, a broadcast of hundreds of asteroid programs. 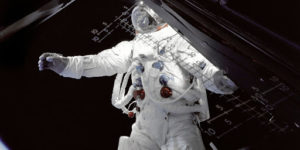 The premiere of Apollo 9 & Beyond featuring Rusty Schweickart debuted on Asteroid Day TV. Due to the COVID pandemic, Asteroid Day opted for  virtual programming instead of events  in Luxembourg. Asteroid Day TV was broadcast online over SES satellites and included hundreds of educational asteroid related programs.

The film, Apollo 9 & Beyond, is a profoundly beautiful and moving look into Apollo 9 astronaut and B612 co-founder Rusty Schweickart’s space mission, his life-altering spacewalk, and our cosmic birth. In the film, he reflects on how those experiences shaped his worldview later in life. Rusty describes testing the Lunar Module, the first true spaceship that four months later would land men on the moon; his historic spacewalk, the first EVA of the Apollo era; and the incredible beauty of the Earth from space.  Asteroid Day TV ran from June 1, 2020 to July 4, 2020. You can now watch Rusty’s film here.

The film was directed by Jeremy Theoret and produced by Apollospace in association with Andre Ross. Apollospace produces the most comprehensive, fully corrected, highest quality, and highest resolution space program images and image collections available, including many from Rusty’s Apollo 9 Mission as well as Apollo Mission films.