An inspiration to women in STEM and to astronomers worldwide, Shoemaker’s discoveries helped educate the world on asteroids. 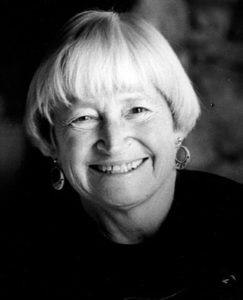 B612 and the Asteroid Institute express their deepest gratitude for the contributions Carolyn Shoemaker made in the field of astronomy and to the detection of asteroids in the solar system. She was a key player in the launch of Asteroid Day after joining the 100x Asteroid Declaration—a global call to action signed by other luminaries including Nobel laureates, astronauts, and astrophysicists. 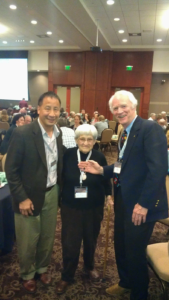 Carolyn, Rusty, and Ed at the Planetary Defense Conference in Flagstaff, 2013

A valued advisor to the Asteroid Institute, Carolyn discovered Comet SL-9 with her husband Gene Shoemaker and astronomer David Levy in 1993. Throughout her life she found over 800 asteroids and 32 comets, bringing proof that searching the Universe does not hinge on profession or gender—Carolyn was an amateur astronomer!

Now members of the Asteroid Institute’s leadership pay tribute to Carolyn, recalling the memories they shared with her as scientists working for a common cause. B612 co-founder and Asteroid Institute executive director, Dr. Ed Lu, reminisces on Carolyn’s wit and her gentle character. “One of the highlights of our many B612 trips to Meteor Crater was the chance to see Carolyn Shoemaker,” he says. “She would always try to meet up with us, often at the crater itself, but sometimes just for dinner afterwards. She had captivating stories, told in an unassuming way: I remember her telling us about discovering Comet Shoemaker-Levy 9, and the realization that it would eventually crash into Jupiter.” Carolyn lived in Northern Arizona, and the B612 and Asteroid Institute crew and supporters will miss visiting with her during trips to the Meteor Crater impact site. 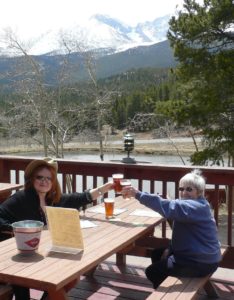 Planetary Scientist and B612 board member Clark Chapman “knew Carolyn Shoemaker for many decades,” he recalls. “I got to know her especially well in 1990 when she and Gene led a group of fifty scientists on an excursion through the Australian Outback to visit impact craters. During the clear nights, we would lie in our sleeping bags under the starry skies and could see Comet Levy 1990c—discovered by David Levy who was already collaborating with the Shoemakers. Shortly after, Carolyn recognized a “squashed comet” on an expired Palomar Schmidt telescope film. It was the famous Shoemaker-Levy 9 comet which crashed into Jupiter sixteen months later.” The group shared joy and intrigue for the night sky and made many memories along the way.

It was Carolyn and Gene’s work that led to NASA’s NEAR Shoemaker mission in which a spacecraft orbited and landed on an asteroid for the first time. A breakthrough venture, NEAR’s 25th anniversary earned the global program “theme” at this year’s Asteroid Day. 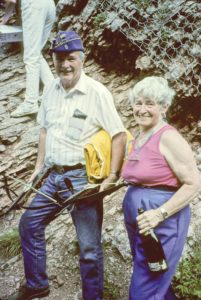 After their camping trip, Chapman met with scientist Walter Alvarez and the Shoemakers at the site of the K-T / K-Pg boundary in Gubbio, Italy—a key location for geologists measuring the timelines of life on Earth. The area is made of layers of rock where Alvarez, a renowned expert, and his colleagues found high iridium, or space metal, marking the impact of the asteroid that caused mass extinction 66 million years ago. Clark enjoyed the couple’s friendship, and a dozen years later to Chapman’s surprise, his wife invited Carolyn as the “secret guest” to his 60th birthday party. 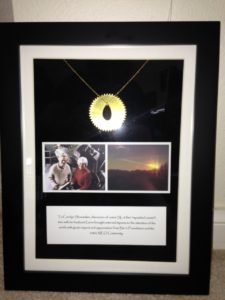 With great respect and appreciation, Rusty Schweickart presented this tribute to Carolyn at the first fundraiser to support the ASE NEO Committee

Another “secret mission”, Apollo 9 astronaut and B612 co-founder Rusty Schweickart once snuck Carolyn’s wedding ring on a space shuttle tour before returning it with a wedding photo of her and Gene. It was a huge production involving colleagues, friends, and family members, and a complete surprise to Carolyn, who marveled that her ring had been to outer space. “There’s no way we could have possibly done it with the cooperation required of so many people,” remembers Schweickart, “were it not for the love and respect everyone had for Carolyn Shoemaker!” Not only was Carolyn a great astronomer, she was a celebrated friend to many.

B612 board member and Planetary Scientist Dan Durda knew Carolyn as well. He was honored to sit with the Shoemakers at a group dinner one evening at the 1993 Catastrophic Disruption Workshop. The meetings allowed experts to come together every few years and discuss their newest asteroid findings in a casual setting—this time also in Gubbio, Italy—and which led to lengthy discussions about the solar system. “But,” Durda says, “my favorite memory is when my Mom and Carolyn met at Spacefest in San Diego in 2009. They were the same age and could see ‘eye to eye’ in so many ways.” For Dan, an asteroid specialist, it was epic seeing his mother hang out with the record holder for asteroid and comet discovery. 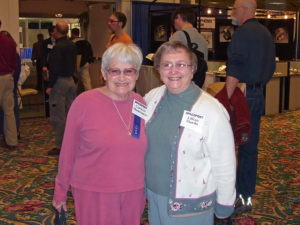 Not only was Carolyn memorable to the people she met, but she influenced those who followed in her footsteps. B612 researcher Mario Juric is Associate Professor of Astronomy at the University of Washington. Although he did not know the Shoemakers personally, he was moved by the work they did. He explains with technical detail that his “first more serious foray into astronomy and computing was observing SL9 fragment impacts on Jupiter with a 40 cm telescope in Visnjan (MPC 120), and writing a simple N-body code to simulate its disruption. Being 15 years old at the time,” he says, “it was inspiring to see an object like that discovered by three astronomers with telescopes not much bigger than those I’d had access to.” Now an expert himself, Dr. Juric understands the value of dedication with or without an astronomy degree.

Carolyn Shoemaker was appreciated with many awards throughout her career, including an honorary Doctor of Science from Northern Arizona University, and the naming of asteroid “4446 Carolyn” in recognition of her success.

Carolyn passed away on August 13, 2021. Perhaps she will join her husband’s ashes on the Moon—the pair reunited to make the “face of heaven so fine, all the world will be in love with the night.” These words from Romeo and Juliet accompanied Gene’s ashes aboard the NASA Lunar Prospector for his memorial above Earth. It is because Carolyn and Gene Shoemaker loved the dark and quiet skies that many will stand on their shoulders to continue searching for discovery. With great respect and appreciation from B612 and the entire NEO community, we wish them both Godspeed.

“Girls must take as much Math as possible.” Carolyn Shoemaker