Last month, Europe’s space ministers gathered at Space19+ in Seville, Spain and approved ESA’s Hera asteroid mission for construction and launch, as part of the Agency’s broader planetary defense initiatives that aim to protect citizens worldwide. Following NASA’s planned 2020 DART mission, which will intentionally crash an impactor spacecraft into the asteroid Didymos’ small Moon, Hera will visit Didymos in 2026 providing measurements of the impact’s effect on the small moon’s orbit. 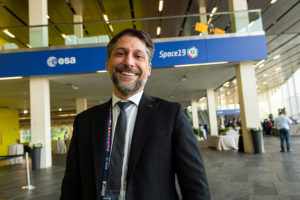 B612 has taken an active role in advocating for the Hera mission. Through the creation and continued sponsorship of programs such as Asteroid Day, we’ve helped make it possible to educate the world about asteroids and asteroid missions. Asteroid Day LIVE participants Dr. Patrick Michael, Ian Carnelli and Jan Woerner were instrumental in securing Hera’s success. Additionally, Asteroid Day founding members including myself, B612 co-founder Rusty Schweickart, B612 Strategic Advisor Brian May, and filmmaker Grig Richters embarked on active promotion of the Hera mission this year. You can read more Rusty’s key interviews with Russia Times, International Business Times, Space News and during a series of events hosted by ESA and Brian May’s contribution in this ESA video about Hera. Asteroid Institute Executive Director, Dr. Ed Lu has also written about Hera and talked to the press extensively about the importance of a demonstration deflection mission.

B612 has been one of the earliest voices about humanity’s need for an asteroid deflection mission. Through our Asteroid Institute, we have been a strong public advocate about the need to increase the rate of discovery of near-Earth asteroids and be prepared to analyze that data. 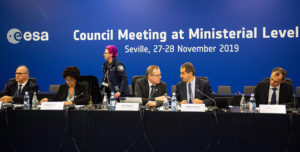 Founded in 2002, B612 initially worked to find technical solutions for asteroid deflection, assuming the necessary first step of discovering and tracking threatening asteroids would be managed by governments. Among the accomplishments in the first decade of B612’s operations was to develop an understanding of asteroid deflection technologies and the complexities of the decision making and policy process that goes along with employing such technologies. We also globally advocated for increased asteroid detection capabilities, which, in part, led to the United States Congress in 2005 calling for NASA to find and track asteroids larger than 140 meters.

Thanks to our efforts and the efforts of those like us, scientists, governments and people around the world have become aware of the importance of planetary defense. Through asteroid mapping and adequate early impact warnings, the world now knows that asteroid deflection is possible. Approval of the Hera mission is a testament to the global support of this issue and the work of people around the world pushing the conversation forward including the Association of Space Explorers and the United Nations.

Thanks to each and every one of you who have supported our work at B612 and the Asteroid Institute.  Your support enabled us to be a part of this achievement to ensure that collectively humanity learns how to deflect an asteroid.

colleen@asteroidday.org
THE WORLD NEEDS YOUR HELP. BE PART OF OUR MISSION CREW.