Good News, 2018 VP1 Hitting Earth is Nothing to Worry About

While 2020 has handed out plenty of things to worry about, asteroid 2018 VP1 hitting Earth on November 2nd isn’t one of them.

You’ve probably seen the sensationalist headlines of a potential Earth impacting asteroid heading our way on November 2, the day before the United States presidential election. We don’t understand what makes a story go viral like this, but it certainly was not because this event poses a real risk. Asteroid 2018 VP1 has less than 1% chance of hitting Earth’s atmosphere, but even if it does hit it will disintegrate in the atmosphere and simply be an interesting fireball in the sky. Here are the facts:

-Analysis of this asteroid’s trajectory is based on only 21 observations spanning just under 13 days (from November 2, 2018 – November 16, 2018). The fact that there are relatively few observations of 2018 VP1 means there is considerable uncertainty in the orbit, which means the best we can say right now is that the asteroid will likely pass Earth somewhere between a few thousand miles from Earth and a few hundred thousand miles from Earth! In other words , it may not even come close!

-The impact probability with Earth is about 0.4%

-Even if it hits the atmosphere, it will just be a bright meteor in the sky 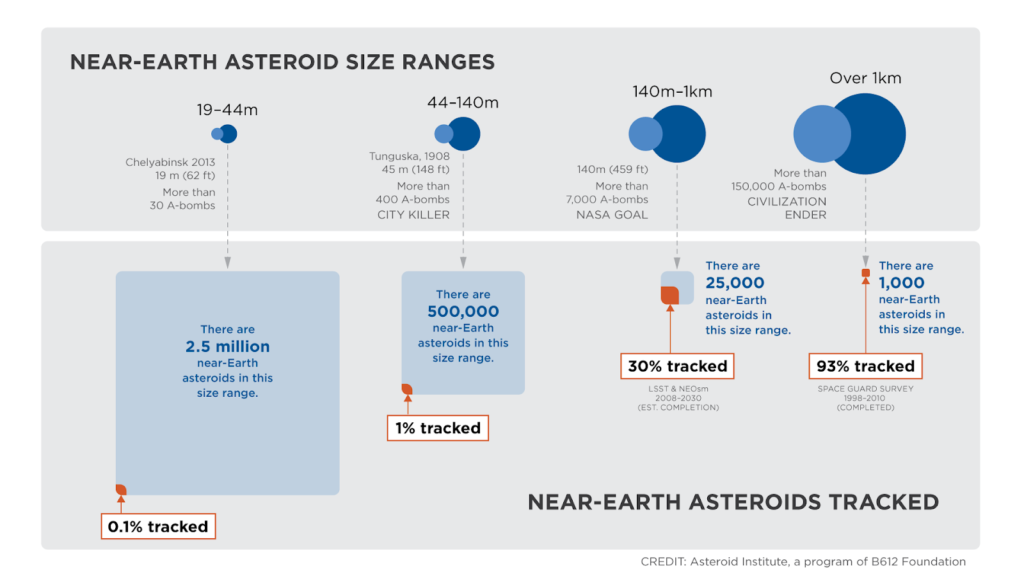 The Asteroid Institute had previously released this graphic showing the relative number of potentially dangerous asteroids as a function of size. As you can see the 6 ft sized 2018 VP1 is too small to be considered a risk and is not even represented on this graphic.

While asteroid 2018 VP1 poses no risk to Earth at all, it is a good example illustrating how asteroids that are only tracked for a short period have considerable uncertainty in their orbits. Had this been a very much larger asteroid this conversation could be quite different.  The Asteroid Institute, a project of B612 led by former NASA astronaut Dr. Ed Lu, is building open source, cloud based astrodynamics tools to analyze asteroid orbits.

Dr. Lu and his team are working on several projects such as the Asteroid Decision Analysis and Mapping project (ADAM), which help support the Asteroid Institute’s vision to develop a dynamic map of the inner solar system. ADAM is a cloud based, open source platform that will calculate the probability of an Earth-impacting asteroid based on data from powerful terrestrial telescopes such as the Vera C Rubin Observatory (scheduled to go online in 2022). You can learn more about the work of the Asteroid Institute here.