San Francisco, May 31,  2022 /PRNewswire/ — The Asteroid Institute, a program of B612 Foundation, today announced it is using a groundbreaking computational technique running on its Asteroid Discovery Analysis and Mapping (ADAM) cloud-based astrodynamics platform to discover and track asteroids. The Minor Planet Center has confirmed and added the first 104 of these newly discovered asteroids to its registry, thus opening the door for Asteroid Institute-supported researchers to submit thousands of additional new discoveries.

The ADAM platform is an open-source computational system that runs astrodynamics algorithms using the scalable computational and storage capabilities in Google Compute Engine, Google Cloud Storage, and Google Kubernetes Engine. The novel algorithm used to discover these new asteroids is called THOR (Tracklet-less Heliocentric Orbit Recovery), and it links points of light in different sky images that are consistent with asteroid orbits. Unlike current state-of-the-art algorithms, THOR does not require the telescope to observe the sky in a particular pattern for asteroids to be discoverable. Researchers can now begin systematic explorations of large datasets that were previously not usable for discovering asteroids. THOR recognizes asteroids, and most importantly, calculates their orbits well enough to be recognized by the Minor Planet Center as tracked asteroids.

For its initial demonstration, Joachim Moeyens, THOR co-creator and the Asteroid Institute Graduate Student Fellow at the University of Washington, searched a 30-day window of images from the NOIRLab Source Catalog (NSC), a collection of nearly 68 billion observations taken by the National Optical Astronomy Observatory telescopes between 2012 and 2019. From this Moeyens submitted a small, initial subset of discoveries to the Minor Planet Center for official recognition and validation. Now that the computational discovery technique has been validated, thousands of new discoveries from NSC and other datasets are expected to follow.

“Discovering and tracking asteroids is crucial to understanding our solar system, enabling development of space, and protecting our planet from asteroid impacts. With THOR running on ADAM, any telescope with an archive can now become an asteroid search telescope,” said Asteroid Institute Executive Director Dr. Ed Lu. “We are using the power of massive computation to enable not only more discoveries from existing telescopes, but also to find and track asteroids in historical images of the sky that had gone previously unnoticed because they were never intended for asteroid searches.”

“We always dreamed of cloud computing becoming a true tool of science and the announcement of today’s and future asteroid discoveries show that this dream is becoming a reality,” said Scott Penberthy, Director of Applied AI at Google. “Scalable cloud-computing as a service is enabling true breakthroughs in astronomy, just as it has for other scientific areas including biology and physics. I couldn’t be more proud of our partnership with B612 and what we’ve been able to accomplish together.”

“The work of the Asteroid Institute is critical because astronomers are reaching the limits of what’s discoverable with current techniques and telescopes. Our team is pleased to work alongside the Asteroid Institute to enable mapping of the solar system using Google Cloud,” said Professor Mario Juric, co-creator of THOR and the Director of the University of Washington’s DiRAC Institute.

“A comprehensive map of the solar system gives astronomers critical insights both for science and planetary defense. Tracklet-less algorithms such as THOR greatly expand the kinds of datasets astronomers can use in building such a map,” said Dr. Matthew Holman, dynamicist and search algorithm expert at the Center for Astrophysics | Harvard & Smithsonian and the former Director of the IAU Minor Planet Center. 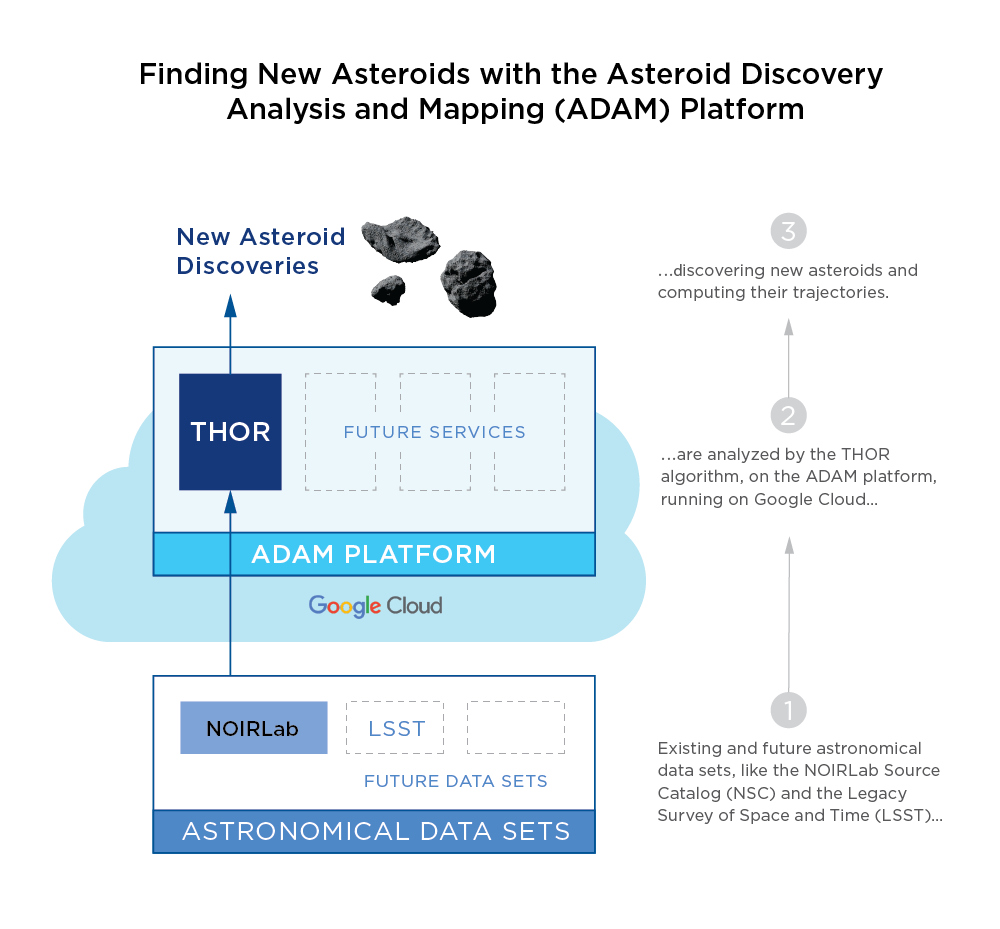 The collaborative efforts of Google Cloud, B612’s Asteroid Institute, and the University of Washington’s DiRAC Institute make this work possible. A short video explaining this news is here and a detailed fact sheet can be found here.

B612 announced a $1 million matching grant from Tito’s Handmade Vodka and $1.3 million in new pledges from donors to advance their engineering efforts. B612 Foundation is privately funded by thousands of donors from more than 46 countries who provide support for the Asteroid Institute’s efforts.

About Asteroid Institute and B612 Foundation

Asteroid Institute brings together scientists, researchers, and engineers to develop tools and technologies to understand, map, and navigate our solar system. A program of B612 Foundation, the Asteroid Institute leverages advances in computer science, instrumentation, and astronomy to find and track asteroids. Since 2002, the Foundation has supported research and technologies to enable the economic development of space and enhance our understanding of the evolution of our solar system in addition to supporting educational programs, including Asteroid Day. Founding Circle and Asteroid Circle members, and individual donors from 46 countries provide financial support for the work. For more information, visit B612foundation.org or follow on social: Twitter, Facebook, YouTube, and Instagram.

Download a .docx file of this press release here.